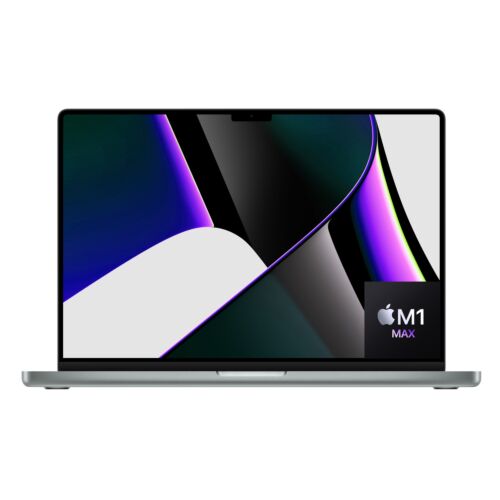 With the launch of the MacBook Pro 16 Z14X0007U, Apple has set the performance bars high with their M1 Max chip processors. The M1 Max chip in this model packs a 10-core CPU, a 32-core GPU, 32 GB of unified memory, and a 1 TB Solid State Drive for storage. This variant is the most powerful one of Apple silicon as of yet. Please note, that the memory can be upgraded up to 64 GB and storage can be expanded up to 8 TB SSD.

In terms of performance of this 16” MacBook Pro, the speed to move files around is the same as its 14” sibling but much fast than the 13” model. According to the Blackmagic Disk Speed Test, the speed was around 5500 MB/s to move files.

Though MacBooks do not have a reputation for being gaming rigs the M1 chip in this machine offers much higher framerates which allows you to play fast-paced games. The 32-core GPU in M1 Max is powerful enough to handle most graphic-intensive games. This device can achieve an average of 73.8 frames per second while running a fast-paced game such as Rise of the Tomb Raider, on low resolution. However, at high resolution, you can still get 26.5 fps for the same game.

Enjoy an ultra-clear display on the 16.2” Liquid Retina XDR screen. The screen resolution is 3456 x 2244 and the pixels per inch density is 254. Unlike previous variants, you get a fairly large display with narrow borders. The side bezels are 20% thinner whereas the top bezels are roughly 60% thinner as compared to their predecessors. Moreover, the adaptive refresh rate is up to 120 Hz and the contrast ratio of 1,000,000:1 is good as well. Apple claims the peak brightness level on this device can reach as high as 1600 nits, with a sustained brightness of 1000 nits, which is remarkably bright for a professional notebook. That said, the sRGB colour spectrum is 100% accurate and the DCI-P3 colour gamut is 77.4%.

With True Tone technology, the colours on the 4K UHD films look rich and true to life. Moreover, the high contrast ratio of 1,000,000:1 makes the shadows appear dark and bring eye-catching brilliance to bright spots.

Available in space gray, this redesigned chassis is slightly thicker than its predecessor. The machine weighs 2.04 kg and bears the dimensions of 14.01 x 9077 x 0.66 inches. The bezels around the display are micro-edge for a modern look. Just like all MacBooks, this too is made out of 100% recycled aluminium chassis. The other notable design change is the elimination of the Touch Bar. The company has replaced it with the traditional function keys which users are more adapted to.

The exhaust vents are located on both sides of the laptop for a better cooling system. Also, the thermal paste allows the components to stay cool by dissipating the heat to heat sinks. The heat then goes blown off through the exhaust vents. With such a strong active cooling system, this machine does not get heated even when using it in high power mode.

The port selection in this model is great. You get three Thunderbolt 4 ports, an HDMI slot, a MagSafe 3, a headphone jack and an SD memory card slot. The SD card reader does support UHS-II.

Unlike the previous variants, which had a 720p webcam, this professional MacBook right here rocks a 1080p camera. The speakers are redesigned so you get an excellent bass through the six-speaker sound system. Like the speakers before, this too supports Spatial Audio and Dolby Atmos for a theatre-like sound.

The Touch ID sensor is a staple in all Apple devices. The top-right key doubles as the touch-ID sensor to quickly let you sign in to the system without having to enter a password every time. The Security Enclave on the M1 chip is responsible for safe and secure biometric authentication. For paramount user convenience, you can enable Apple Pay and pay for your orders via a single touch.

Apple promises 15+ hours of battery life on a single charge on this device. The 100Wh battery can offer up to 14 hours of internet surfing when using Wi-Fi. Moreover, you can fast charge the device with MagSafe 3.

The Magic Backlit keyboard is a staple in all MacBooks. It offers a comfortable typing experience along with backlighting to let you work even in dimly lit areas easily. Moreover, with the elimination of the Touch Bar, the function keys on the keyboard are quite helpful.

The Force Touch trackpad on this device is quite big. It has accurate precision cursor control drivers and is great at picking up gesture commands.

In the new Mac operating system, the menu bar has been tucked into the thin strip of extra screen space on each side of the notch. Also, the Mac OS has a reputation of being resistant to bugs and it has sustained it quite well in this device as well. That said, there is also a shortcuts app on the OS along with the new Live Text feature that allows you to copy the text in the images.

Get your hands on the super powerful MacBook Pro 16 Z14X0007U right now through Paklap. This device is a top-of-the-line creative 16-inch notebook dedicated to professionals. It is perfect for both work and plays with its remarkable battery life, powerful performance, smartly redesigned chassis and large 16.2” screen.

Order now and get free shipping anywhere in Pakistan by making advance payments. Our Cash on Delivery service is currently limited to Karachi, Lahore and Islamabad only. We have other Apple MacBooks available on our website as well. For more queries, you can give us a call at 03041113005 or leave a message on our Live Chat facility on our website.