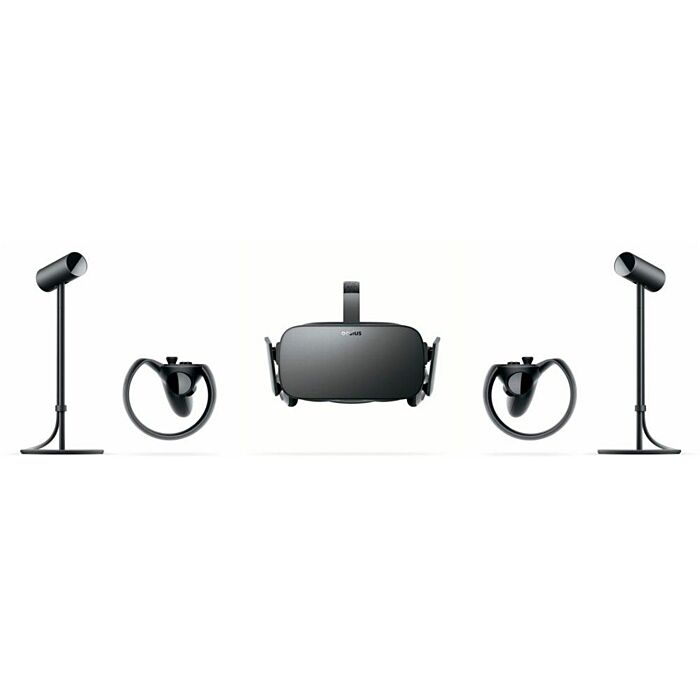 Surround yourself with all the action with this special edition Oculus Rift VR gaming bundle, complete with the action-packed co-op game MARVEL Powers United VR. The comfortable headset features adjustable straps and balanced weight so you can game or watch your favorite movies for hours on end. The touch controllers included with this Oculus Rift VR gaming bundle are ergonomically designed for easy and immersive interaction. The MARVEL Powers United VR game is included for hours of explosive and immersive fun. Unleash the ferocity of Black Panther, smash foes as Hulk, wield Deadpool's katanas or choose from a roster of Marvel's 18 greatest heroes. Get ready for a battle with a full-body transformation only possible in VR.

Rift must be connected by a cable to a PC running Microsoft Windows 10.

Puts navigate, home, back, select, and volume controls at your fingertips.

The audio arms are removable so you can use your own headphones too.

Rift's advanced display technology combined with its precise, low-latency constellation tracking system enables the sensation of presence - the feeling as though you're actually there.

Step into VR with Rift

Whether you're stepping into your favorite game, watching an immersive VR movie, jumping to a destination on the other side of the world, or just spending time with friends in VR, you'll feel like you're really there.

Intuitive action in VR feel as natural as using your real hands.

Bring your real hands into virtual environments with this pair of Oculus Touch controllers.

The positional tracking is performed by a USB stationary IR sensor, which normally sits on the user's desk, allowing you to use Rift while sitting, standing, or walking around the same room.

This action-packed multiplayer game is filled with hours of explosive and immersive fun across iconic Marvel locations.