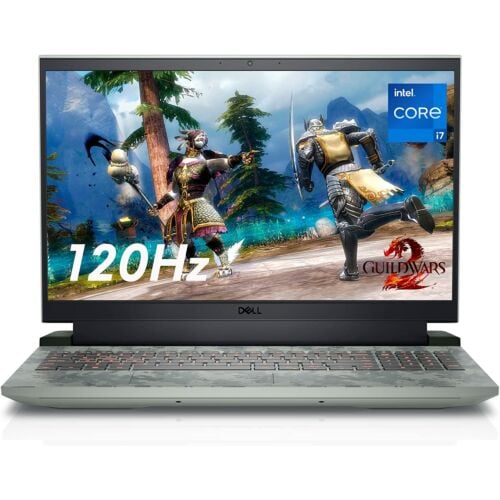 Dell has been doing an incredible job of creating budget-friendly gaming laptops and this one is just another example. Powered by the latest 12th Gen Intel® core processor, NVIDIA GeForce RTX graphics card, customisable RAM, and Windows 11 Home, Inspiron G15 5520 will rule the gamer’s hearts without breaking the bank.

Just know that a processor should be capable of handling your choice of games. With the 12th Gen Intel Core i7-12700H processor it can take up any task you throw at it. Be it playing the most demanding AAA titles, creating illustrative content, and 4K videos. It will not disappoint you in any way. The processor is Tetradeca-Core with 14 Cores in total. 7 Performance Cores (P-Cores) and 7 Efficiency Cores (E-Cores), together they work to mete out an unmatched performance. The clocking speed ranges from 2.3 GHz to 4.7 GHz.

To keep up with your storage needs, it has 512 GB of built-in SSD space. Solid State Drives are a faster storage option with faster data transfers. They also lend a hand in controlling the overall speed of the system.

The more RAM a computer has, the more apps, games, and files it can handle at once. If you do not consider them when buying a PC, you’re doing it wrong. Dell Inspiron G15 5520 comes pre-equipped with 16 GB of RAM, with two 8 GB DDR5 RAMs. These RAMs run at a terrific speed of 4800 MHz. It is dual-channel capable so the user has the option to upgrade.

This is one of the most important components for a gamer as it decides how immersive (or not) your game-play will be. NVIDIA GeForce RTX 3000 graphics cards are from the world’s leading GPU manufacturer. It has a 6 GB dedicated NVIDIA GeForce RTX 3060 GDDR6 graphics card which lets you experience ray-traced graphics and pin-point accuracy in detail. This GPU makes it great not just for gamers but also for graphic designers, architectural engineers, and creatives.

For the display, you get a large 15.6-inches Full HD screen that gives a resolution of 1920 x 1080p. It has a refresh rate of 120 Hz and the screen is anti-glare to reduce reflections. It has Wide Viewing Angles so you can enjoy multiplayer games and movies as well. At max, the brightness will go up to 250 nits and the display is fit into a narrow bezel design.

You will be able to experience optimum temperatures even while fierce gaming thanks to the dual air intake, fans that have ultra-thin blades, four strategically placed vents, and copper pipes.

This particular variant is Spector Green Camo in colour, which looks very stylish. When we say green, you might think that it looks loud but it is nothing of that sort. It is in fact a subtle army green colour with an army print. There is a signature Dell logo on the center of the lid. The bottom has plenty of space to make way for the thermal design.

The keyboard is backlit and has some really cool shortcuts at hand. Similar to Alienware, it has Game Shift technology which can be induced via a button press. With this technology you can turbo-boost the performance of your game, simply by pressing FN + Game Shift (F9) key. It also increases the fan speeds to remove the extra heat.

Get your hands on the Dell Inspiron G15 5520 gaming laptop. With a powerful processor and GPU, a large and responsive display and an unique Spectro Green Camo chassis, it is ready to be your next gameplay partner. Place your order today and get it delivered in the comfort of your home free of charge by paying in advance online. Orders from Karachi, Lahore and Islamabad can avail our Cash-on-Delivery service as well. That said, you can have a look at other Dell gaming lineups or the gaming laptops in general. For any further queries contact us via email at [email protected], leave a message on the LIVE CHAT window, or call us at 0304-1113005.