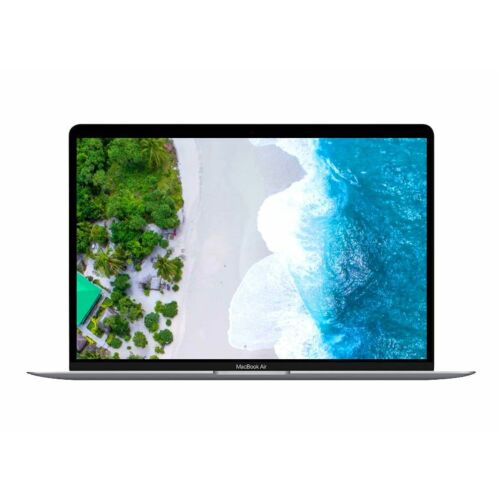 Apple has permanently made its mark in the market by never failing to come up with groundbreaking technological devices with mesmerizing features and unmatched contemporary designs. This superlative piece has left all the customers stunned as this new invention has surpassed their expectations. This model (MVH22) is a continuation of the 10th Generation of the cutting edge Apple Macbook Air series. The Apple Macbook Air (MVH22) features the 10th Generation Core i5 Dual-Core Processor. This processor has 2 Cores and 4 Threads. The processor speed is 1.1GHz Turbo Boost up to 3.5GHz, with 6MB L3 cache. It has an installed RAM of 8GB. The dual-core processor offers higher speed than previous models across everyday activities, from editing and organizing pictures and videos to creating presentations. The RAM ensures that the commands are taken and acted upon abruptly, making this device one of the fastest in the market.

The latest Apple MVH22 has a memory of 3733MHz LPDDR4X onboard. The size of the Storage is 512 GB PCIe-based SSD. It gives 2.5 times faster than previous generations' flash storage. It is more reliable than ever and 22 times faster than the traditional hard drive. It quickly starts up and launches apps. With this much memory, you can store heaps of data without worrying about running short of storage. This device is enabled with light-up keys that allow you to work in any kind of light. Backlit Magic Keyboard with 78 (U.S.) or 79 (ISO) keys together with 12 function keys and 4 arrow keys in an inverted-T arrangement Ambient light sensor. The touchpad has Force Touch mounted in it which enables sensitivity towards touch as well has enables firm control over the cursor. It is a joy to use and has excellent gliding capabilities. It gives precise and satisfying key-strokes with definitive pressure points. However, there is no separate numeric keyboard included. With Intel iris plus graphics, it delivers 80 percent faster graphics, making graphics sensitive activities such as gaming and editing faster than ever. It has a shared graphics memory type with an Intel graphics processor.

The size of its screen is 13.3-inch IPS Retina LED. The screen surface is a 13.3-inch (diagonal) LED-backlit display with IPS technology. The resolution of the screen is 2560-by-1600 native resolution at 227 pixels per inch allowing you to view an array of colors at hand. Apple supports true tone technology that automatically adjusts the color temperatures according to the environment. The screen consists of an anti-reflective layer which protects the eyes and makes long hours of screen time stress-free. It does not feature a touch screen; however, it is equipped with a biometric fingerprint sensor to bring the security and safety of your corporate data and intel to the next level. It weighs about 2.8 pounds (1.29 kg). It includes Bluetooth 5.0 wireless technology. It is compatible with wireless Wi-Fi of the type 802.11ac Wi-Fi wireless networking IEEE 802.11a/b/g/n. two Thunderbolt 3 connectors are versatile. It provides you consistent and continuous connection without any interruption to get all your tasks done and dusted in a flash.

Let’s put the spotlight on the ports, the system has Two Thunderbolt 3 (USB-C) ports with sustenance for Charging DisplayPort Thunderbolt (up to 40Gb/s) USB 3.1 Gen 2 (up to 10Gb/s) but it doesn’t possess an HDMI port.

The Thunderbolt 3 ports deliver as much as 20Gbps of bandwidth for every external device that enables you to move data four times faster than with USB 3 port. With a few connections, you can transform your MacBook air from a portable notebook to a fully equipped workstation. The most exciting feature of this model is the 720p FaceTime HD camera. It is until now the best laptop camera in the market, not to mention the excellent dual microphones which provide loud and clear sound quality. This relieves you from the worry of failing at conference calls. It operates with the famous mac OS software, it is compatible with all the latest upgradations in the software. Apple never fails to improve and advance it’s software technology and makes the latest technology available to the previous models as well. That is one of the upsides of getting this product. This brand new Apple MVH22 Macbook Air gives a new and improved sound experience as compared to the previous ones. It is 25% louder and has 2 times more bass. Voice recognition of Siri is better than ever.

The latest MacBook Air (MVH22) has a remarkably long battery life and lasts up to 12 hours without charge. It has a standby time of up to 30 days which saves one from the hassle of naming and saving files every hour. You can just resume from where you left off even after weeks. It also saves you from the loss of important data due to shutting down, which is a drawback in other devices. The charger is not chunky and bulky in size; it is a very small one that is easy to carry around adding to its ease of use.

The quality of the MacBook Air 2020 series has aluminum chassis, which is as excellent as ever. It has perfectly built, sophisticated, and sleek surfaces with good stability. This model is even slimmer and lightweight than the previous ones making it handy. Moreover, the system does not have any sharp surfaces which could hurt your arms during long typing sessions which were an issue with the previous models. The narrow border uni-body beautifully merges with the rest of the body making the screen stand out.