Be the first to review this product
Rs. 107,900
In stock
SKU
Apple Ipad Air 4 (2020)
Notify me when the price drops
Email
Skip to the end of the images gallery 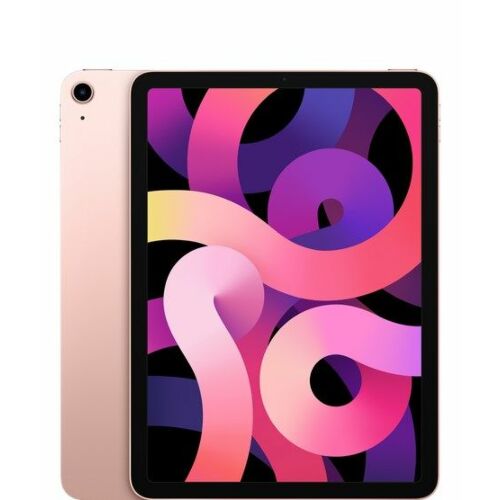 A sleek, modern, and stylish finish, a powerful processor, and Apple's trusted name, these all features stand the new Apple iPad Air 4 (2020) in Pakistan out from the crowd of local tablets. In the modern-day era, tablets have been improved in all aspects that they have easily replaced laptops. You can get every type of mouse and trackpad support from it can easily attach a keyboard, and have a relatively faster processor that can outperform most of the laptops out there, these all specs make the latest Apple Tablet a fantastic choice for people who prefer adopting the modern tools for this modern era.

One of the most important aspects to focus on is the design of the latest iPad Air 4 2020. This sleek gadget is equipped with most of the features you can expect from an iPad Pro except for the relative price tag. It can also be considered an essential step to improve the overall technology from the past. A variety of aspects can be seen improved throughout the brand new iPad 4 2020 series in Pakistan.

The most prominent feature that can be witnessed is the complete sleek, smooth, and robust build with sharp curves, rounded corners, and noticeable flat edges. This design can be seen throughout Apple's new lineup that includes Apple tablets and iPhone 12. This revolutionary design can be depicted as one of the most prominent features in the new upcoming 2021 Apple lineup.

With the aid from such a marvelous design, iPad Air 4 in Pakistan also supports the use of the Apple Pencil 2nd generation. Which can prove itself as an absolute game-changer due to its wireless charging and pairing feature. Along with the compatibility of Apple pencil, it also carries a USB Type-C port, just like the Apple Pro, which proves more than just innovation as it can help its linking to various other exterior electronic devices such as an external monitor and storage

Along with such a fantastic design, Apple also decided to remove the bold and bulky home screen button from the middle, making the overall shape more attractive and appealing, giving it a typical 'tablet' look.

The processor installed in the new iPad Air 4 can be classified as one of the remarkable changes in this new generation. It can be witnessed that the iPad 4 in Pakistan comes with a powerful A14 Bionic chipset that only has 5nm thickness, making it a relatively better processor than the last ones in the market. It is the same 6-core chipset, which can be seen in the latest iPhone 12 models.

Talking about the processing architectures precisely, it can perform drastically better than even the latest Microsoft’s Surface Pro 7! The A12Z chipset used in the Apple Pro of 2018 gives an overall benchmark score of 1114 for a single-core. The A14 chipset used in this iPad Air 4 2020 can provide a significantly higher 1600 single-core score that is a notable improvement.

New Apple iPad Air 4 is equipped with many useful features like the "scribble" option. This feature lets you write and edit any text present on the screen with the help of Apple Pencil. Also, it allows you to set all third-party apps as your default web browser choice, just like in a laptop, which gives the users an edge of using the apps like Chrome, Firefox, Safari, etc., as a desktop version rather than the compact, dull mobile version.

Along with features like connecting an external wireless mouse and a magic keyboard to use it as a laptop, you can also use Apple Tablet Air 4's C-port to connect it to an external monitor, hence compensating it for its tiny screen.

Although iPad Air 4 carries a unique, modern, and classy design from its latest generation lineup, it also makes it equivalent to use the number of features that can be utilized with other gadgets. One of the essential aftermarket accessories of the manufacturer that can now be used for iPad Air 4 as well as the magic keyboard. These features can prove useful for people who are not looking to spend a hefty amount on other gadgets. Instead, they can go for it and attach the magic keyboard.

Another most prominent feature worth mentioning is the new touch ID power button placed on the top of it. This has been chosen as a better alternative than putting a face ID on the new Apple Tablet in Pakistan.

Ipad Air 4 can be seen with a 10.9-inch touchscreen, which proved itself far more significant than its value. It can produce excellent visuals with vibrant color display output, making its user feel very snappy in terms of touchscreen response. The display offers a decent 60 Hz refresh rate and 500 nits of brightness, making it an optimum solution to proper outdoor sunlight.

Other specifications can be listed as the 12 MP of the rear camera to take fabulous shots with more apparent color contrasts. In the front, there is a 6 MP front-facing camera hidden in the bezels, which does not give a bulgy and awkward look when facing the device.

iPad Air 4 in Pakistan comes with a vast storage option of 64 GB or 256GB, capable of storing every type of data for you. However, If you think that this much space can run short for you in the future, you can always go for its alternative solution by purchasing the Apple Air 4 with 256 GB of internal storage to manage all your storage needs.

If you are a person who prefers their digital life companion to be smart rather than a bulky old-school laptop, but you also like better things on a tighter budget, then iPad Air 4 is your choice. If you think our prediction for your daily driver is accurate, click the 'buy now' button to get it in a couple of moments only from Paklap. Paklap offers the lowest best prices of Apple iPad Air 4 (2020) 64GB and 256GB in Space Gray, Silver, Rose Gold, Sky Blue, and Green color in Pakistan with nationwide free delivery.